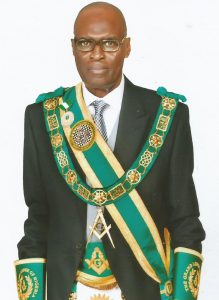 (b). Deputy for Supreme Council; Province of Nigeria far Eastern (2007-2017).
He is the Substitute Provincial Grand Master of the Royal Order of Scotland, 2014 till date of the Provincial Grand Lodge of Midwestern & Eastern Nigeria as well as a member of the Dormer Masonic study circle, UK.